For the past seven years, Brahmastra has been in the works. Alia Bhatt and Ranbir Kapoor, the film’s lead actors, married earlier this year, and their romance apparently began while they were filming Brahmastra.

Brahmastra Part One is a fantasy adventure film starring Ranbir Kapoor and Alia Bhatt. Disney will release the movie in theatres all across the world. Following its acquisition of Fox in 2019, the House of Mouse now possesses one of the film’s production companies, Fox Star Studios, which is also the distributor. Brahmastra is Ayan Mukerji’s directorial. He has previously directed Wake Up Sid and Yeh Jawaani Hai Deewani. The movie also stars Amitabh Bachchan, Mouni Roy, Dimple Kapadia, and Nagarjuna Akkineni in prominent parts. It’s the first of a series — a trilogy, to be exact — and is believed to represent the beginning of a new cinematic world called the Astraverse, similar to Disney’s own Marvel Cinematic Universe. 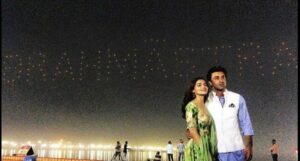 Although Indian films are distributed internationally, Brahmastra is certainly going to garner a lot more attention and eyes than most Indian films due to Disney’s sponsorship and massive marketing apparatus that has made brands like Marvel and Pixar such worldwide hits. According to Deadline, the studio has also put it to its domestic (North American) roster. The film will be on neck to neck competiton with other Disney releases such as Thor: The Dark World, Avatar: The Last Airbender and Black Panther: Wakanda Forever.
Well this is a massive and huge name and fame that a bollywood industry will gain. The release of Brahmastra will not only bring recognition but also a dignity and pride to the industry. All the actors have worked their best and it will be great to know how the film performs post release. The best part of the movie is, this is just the first part and at the end it might leave the audience in eager and mystery which automatically brings the craze to watch the second part. The film is also supported by Dharma Productions,Starlight Pictures and Prime Focus, in addition to Fox Star Studios. On September 9, it will be released in five Indian languages: Hindi, Tamil, Telugu, Malayalam, and Kannada.