Actor Aamir Khan has been busy with the shooting schedule of ‘Laal Singh Chaddha’. The film shooting began in December 2019 but due to the pandemic, the shooting came to a halt in March 2020. The filming only resumed later in the year as Aamircontinued to shoot in various parts of the country. Now, he has halted the schedule in order to fly to Jaipur to shoot a dance number in actor-friend AminHajee’s directorial debut, ‘Koi Jaane na’. 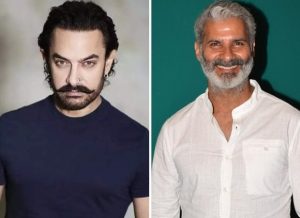 According to the reports, Aamir Khan will be paired opposite Elli AvRram in the song. When Amin told him about his psychological thriller, Aamir was thrilled about it. He agreed to do a cameo in the film in miniute. He will be in Jaipur for the next five days to shoot the song. A huge set has been created. The song has been composed by Tanishk Bagchi and written by Amitabh Bhattacharya. The number will be choreographed by duo Bosco and Caesar.

Amin Hajee’s directorial debut stars Amyra Dastur and  Kunal Kapoor. Amin and Aamir Khan have been friends for over 20 years. He played the role of speech impaired drummer Bagha in ‘Lagaan’. He also starred as Vir Singh in ‘Mangal Pandey: The Rising’. Earlier about the film, Hajee said that, he narrated the story to both Aamir Khan and Ashutosh Gowarikerand both of them suggested him to direct the movie with the script. He added that  he waited for six years from getting their approval to finding a producer. The film will also feature seven songs in it and each song takes the story forward.

‘Laal Singh Chaddha’, on the other hand, will also star Kareena Kapoor in the lead role. The movie was supposed to hit the theatres last year but  However, the project got delayed due to the coronaviruspandemic and lockdown.

The movie is the official Hindi remake of the Hollywood film, ‘Forrest Gump’ starring Tom Hanks in the lead role.