The most awaited movie ‘Atrangi Re’ which stars Akshay Kumar, Sara Ali Khan and Dhanush is going to stream on Disney Plus Hostar on 24th December.

Bollywood Khiladi Akshay Kumar took to his Instagram and shared a small humming video from the film and wrote, “Garda udaa diya.. Ab hosh udaane ka time! Hope you give your love to all of us, including the animated elephant in the teaser. Streaming from 24th Dec on @disneyplushostar”. Recently, Akshay Kumar revealed that he is playing a small part. This movie completely revolves around Sara Ali Khan and Dhanush.

Sara Ali Khan, Akshay Kumar and Dhanush starrer is presented with a liberal portion of absolutely magical realism. Rinku (Sara’s character) is between two different worlds – her truth of today and the one she lived ages prior. The chief, in any case, clarifies that there is something else to Atrangi Re besides what we see in the trailer. 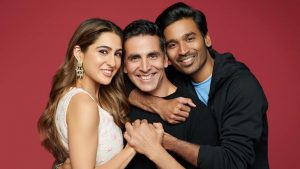 Each of the three characters get a great entry here. Sara is particularly amazing as she shows development as an entertainer. At the point when she inquires as to whether for once a lady can have everything throughout everyday life, she voices the expectations and goals of her gender who shuffle life, home and love consistently.

The songs of the movie are going to be released on 14th December. The movie is produced by T-series, Cape of Good films and Colour Yellow Production, directed by Aanand L. Rai and written by Himanshu Sharma.