After megahit Pushpa, Actor Allu Arjun’s next movie ‘Ala Vaikunthapurramuloo’ has been all ready to launch on 26th of January, 2022, on the occasion of Republic Day. 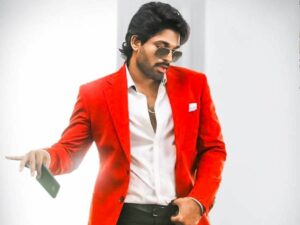 Presently Allu Arjun is relaxing in the success of his extremely anticipated action thriller drama Pushpa: The Rise. His awesome presentation in the movie has been gathering praise and appreciation from the fans and it seems like the movie’s high fever from the common people is not going to get down at this moment shortly.

Currently, in this stage of achievement, the date of launching for another Allu Arjun’s starrer action movie, which is the Hindi version of the 2020 Telugu movie ‘Ala Vaikunthapurramuloo’ has been disclosed. Film critic Taran Adarsh on his instagram shared a Hindi trailer of the film ‘Ala Vaikunthapurramuloo’. The movie clip starts with Allu Arjun wearing a red blazer in hero’s style, then it shows the appearance of leading ladies Pooja Hegde and Tabu. It also features a dance number followed by some action packed series.

Before time also when the poster of this film was revealed audiences were delighted to see the first glance. It pictured Allu Arjun in a black and white floral print shirt and white pants. The movie was written and directed by Trivikram Srinivas in the year 2020. Financed by S.Radha Krishna and Allu Aravind under their banners Haarika and Hassine Creations and Geetha Arts. The film was a megahit between the fans from the 1st day of theatrical launch. It also won numerous awards and privileges and became the 53rd largest earning movie of 2020 globally.

The journalist who initiated the lawsuit opposes Salman Khan’s release in the criminal intimidation...