Actress Alia Bhatt is one of the most outstanding and successful female celeb of Bollywood Industry at present. And not just that, the actress frequently creates tabloids for her city glancing and adorable moments with boyfriend Ranbir Kapoor.

We are now going to dig into Alia’s huge salary for the famous producer Sanjay Leela Bhansali’s movie ‘Gangubai Kathiyawadi’ which is going to release this year and it is going to blow your head and leave you amazed. Movie ‘Gangubai’ is an autobiography constructed on the actual life of ‘ A lady gangster of Mumbai’. The teaser has left all her friends, family and fans amazed as they have never seen her like this before. As per sources Alia Bhatt has charged a huge amount for this movie, and it’s around Rs 20 crores. This might be a huge amount which might leave everyone stunted but it was not that shocking for the makers. Due to the rapid rising of Covid cases in the country, the release date of the movie was changed and made past week and will now be released on 18th of February, 2022, which is the coming month. 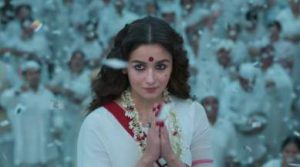 According to sources, Actor Ajay Devgn has an appearance in the movie and audiences are really delighted to see Alia performing with the superstar after performing in her upcoming movie ‘RRR’.

Alongside Gangubai Kathiawadi, both the hero and heroine will also be seen together in SS Rajamouli’s forthcoming movie which was expected to be released  in the 1st week of January but got delayed due to the huge numbers of Covid cases increasing rapidly every single day.