The veteran cricketer shared a beautiful message with the announcement of the baby boy that read, “A new little hand for us to hold, his love is grand, precious as gold. A wonderful gift, so special and sweet. Our hearts are full, our lives complete. We thank the Almighty for blessing us with a healthy baby boy. Both Geeta and the baby are doing well. We are overwhelmed with joy and would like to extend our gratitude to our well-wishers, for their constant love and support.”

Harbhajan Singh and Geeta Basra were married back on October 29, 2015, in Jalandhar, Punjab. 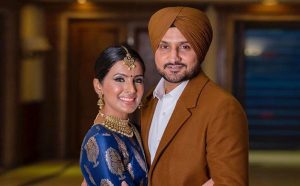 On the work front, Harbhajan Singh plays for two-time IPL winner Kolkata Knight Riders. Earlier, he was part of the Chennai Super Kings as part of the IPL team. He last played in the year 2016. The spinner had played a vital role in India’s World Cup-winning squads in the 2007 T20 World Cup and the 2011 ODI World Cup.

Harbhajan is set to fly to UAE later this year to take part in the remainder of IPL 2021 for KKR.

In June, Geeta Basra’s baby shower pictures went viral. The baby shower was arranged by her friends and Harbhajan Singh virtually. The adorable cake with a sleeping Bhajji had left netizens amused.

As the news of Bhajji being a father the second time broke the internet, a string of well-wishers and fans poured wishes for the couple and a new journey.