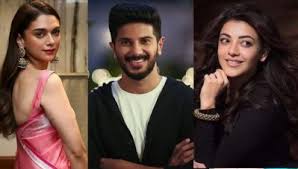 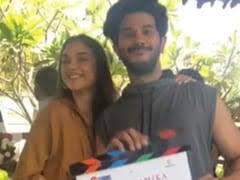 It was earlier reported that choreographer Brinda who had choreographed dances for like Ajit Kumar, Rajinikanth, Kamal Haasan, Aishwarya Rai Bachchan, now is all set to direct a film ‘Hey Sinamika’ featuring Malayalam actor Dulquer Salmaan who worked in movies like ‘The Zoya Factor’, ‘Charlie’, will be seen in the lead role.

Today March 12, the film has been launched officially in Chennai with the entire cast and crew. Titled ‘Hey Sinamika’, the film also stars Tamil actor Kajal Aggarwal who we also have seen in ‘Singham’ opposite to Ajay Devgn and Aditi Rao Hydari in important roles.

Dulquer Salmaan took to Twitter and shared some pictures from the launch, “The magic of new beginnings! Starting the journey of #HeySinamika with some lovely ladies Aditi Rao Hydari, Kajal Aggarwal and under the guidance of my dearest Brinda master!.”

Produced by Jio Studios. ‘Hey Sinamika’ is touted to be a breezy romantic entertainer and major portions of it will be shot in the outskirts of Chennai. The title of the new film is borrowed from a popular song in ‘Mani Ratnam’.

‘Laxmi Bomb’, director walks out of the film