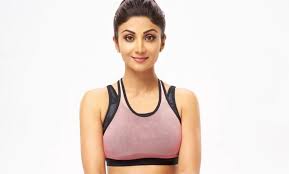 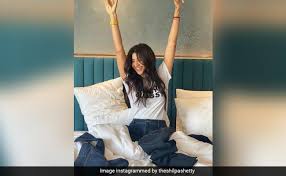 Shilpa Shetty, always urges her fans to stay happy and “smile more” because according to her, “a smile is the one curve that we don’t need to flatten in times like these.” In her latest post on social media, Shilpa  shared a photograph of herself, in which she can be seen laughing with all her heart on her bed, which also includes her happiness mantra.

In her post, Shilpa focused on the importance of smiling and said that it “cures all your ailments” and “sets everything straight.” She also asked her fans to “spread the cheer” and make the world “a better place to live in.” Shilpa wrote: “A smile is the one curve that we don’t need to flatten in times like these… the one curve that sets everything straight, more contagious than a virus but this one cures all your ailments.”

“Be the reason for someone’s smile and see how the world slowly becomes a better place to live in. Spread the cheer,” she added.

Earlier this week, she shared a clip of herself performing yoga and wrote: “Give your body a little activity so it doesn’t go into a state of shock in these testing times.”

On the work front, Shilpa Shetty will make her comeback after more than a decade with Sabbir Khan’s ‘Nikamma’, in which she will share space with Shirley Setia and Abhimanyu Dassani. She also has Priyadarshan’s comedy ‘Hungama 2’ in her pipeline.