In 2015, Ajay Devgan presented in the remake of the Malayalam thriller film ‘Drishyam,’ which was a big success and has since become a beacon of light. Following the release of the original Mohanlal starrer’s sequel last year, it was stated that a Hindi version of ‘Drishyam 2’ will be released soon. Filming for the project began a few months ago in Goa, and according to the latest reports, Ajay will continue work on ‘Drishyam 2’ today. Ajay appears to be able to focus on his widely anticipated ventures,now that his film ‘Runway 34’ has been released. As per recent reports and suspection, Ajay Devgan shall shoot for the Drishyam sequel for one month,before his return to India. When asked about the project and his role, Ajay stated, “Vijay is a multifarious and a versatile character who delivers a compelling story onscreen. The filmmaker Abhishek Pathak, has amplified vision for this picture.
I’m looking forward to Part 2 because it will fill in the enormous shoes left by the first film in terms of people becoming invested in the mystery and the characters, Abhishek said.
It picks up 7 years after the events of the first film and puts Vijay’s determination to defend his family to the test. In every way possible, this film aims to pay tribute to the ‘crime-thriller’ genre. In addition to Ajay, Tabu, Shriya Saran, and Akshay Khanna will appear in the film. It will be intriguing to watch how closely ‘Drishyam 2’ follows in the footsteps of its Malayalam predecessor.
Speaking about Drishyam , the movie has left a forged impact on the audience. The crime thriller was well appreciated by the audience and also performed well on box office. Ajay Devgan rocked his role, along with other actors too. Well Ajay being a huge mega-star, has a huge fan base who are already waiting for Drishyam 2. His last release was Runaway 34. 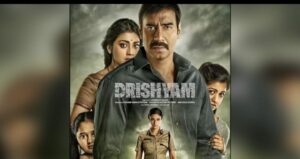 99 Songs trailer: AR Rahman’s musical movie is all about love and dreams