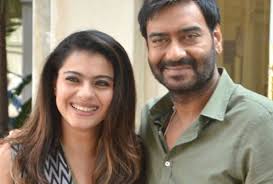 Ajay Devgn made the best use of flashback Friday by sharing a priceless throwback picture, in which he sort of compared his and wife Kajol’s companionship of 22 years to lockdown. Sharing an old picture of himself and Kajol from one of their films, he wrote: “Feels like it’s been twenty-two years since the lockdown began. #FridayFlashback”.

Kajol and Ajay met on the sets of ‘Hulchul’ and later got married in the year 1999. They have worked together in several films such as ‘Gundaraj,’  ‘Ishq’, ‘Dil Kya Kare’, ‘Raju Chacha’, ‘Pyaar Toh Hona Hi Tha’ and recent one ‘Tanhaji: The Unsung Warrior’.

On the work front, Ajay Devgn was last seen in ‘Tanhaji: The Unsung Warrior’. He has a couple of films in the pipeline including ‘The Big Bull’, ‘Maidaan’, ‘Sooryavanshi and Bhuj: The Pride Of India’.

Kajol, on the other hand, was last seen Priyanka Banerjee’s short film ‘Devi’, which also starred Neha Dhupia, Neena Kulkarni, Shruti Haasan, and others. She has also worked in ‘Tanhaji: The Unsung Warrior’.