Earlier reports claimed that actor-producer-director Ajay Devgn will soon launch a web show that would also mark Devgn’s OTT debut. Current updates suggest that Devgn’s upcoming web show will be the remake of British TV series Luther. If reports are to be believed, the show will star Ajay as an undercover agent who solves crimes. On 25th March, actor Ajay Devgn shared a cryptic video message on his Instagram account and asked his fans not to call him Ajay anymore but to address him as Sudarshan.  Looking dapper in a yellow T-shirt, Ajay said in the video, “Aapse kitni baar bola hai, Ajay kisko bula rahe ho. Mera naam Sudarshan hai. Sudarshan (how many times do I have to tell you. Who is Ajay? My name is Sudarshan)!”

He wrote in the caption, “Dua mein yaad rakhna, naam hai Sudarshan. #[email protected]” His caption for the video triggered off speculation as fans felt that the actor may make his debut on OTT as well.

According to latest bollywood reports, Ajay’s web show will be based on British psychological crime drama television series Luther starring Idris Elba. The Singham actor will reportedly essay the role of John Luther as Sudarshan who is a passionate detective. The detective befriends psychopath and murderer whom he couldn’t catch due to lack of evidence and later they associate to solve cases together. A well placed industry insider said, “Yes, Ajay will be making his OTT debut with the Luther remake that is jointly being produced by BBC India and Applause Entertainment. Once ready the show will be aired on Disney+ Hotstar, and an official announcement of the show will happen sometime next week.” The insider spilled some more beans and revealed, “The original is a psychological crime thriller with Idris Elba playing the lead. Given the seriousness and gravitas needed for the role Ajay was the perfect fit for the remake. Besides Devgn, the remake will also feature a prominent female lead much like the original, and buzz is that Ileana D’Cruz has been approached for the said role.” 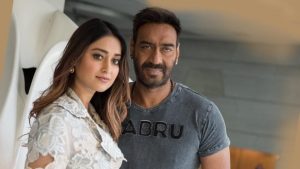 The remake is said to be helmed by Rajesh Mapuskar who directed the 2012 film Ferrari Ki Sawaari and the 2016 film Ventilator. Rimi Sen reveals the reason of participating in Big Boss 9 says she did...

Industry griefs on the death of veteran Tamil actor and comedian...

Ajeeb Dastaans Review: Exquisite acting by each actor in the anthology...