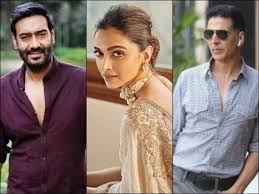 The year 2020 started off with a big clash as Ajay Devgn and Saif Ali Khan’s ‘Tanhaji: The Unsung Warrior’ and Deepika Padukone’s film ‘Chhapaak’ released on the same day. Where  Ajay’s film did well at the box office, while Deepika’s film crashed at the box office. Despite rave reviews, the film failed to perform at the box office.

Not only these two films but even ‘Street Dancer 3D’ clashed with ‘Panga’ while ‘Shubh Mangal Zyada Saavdhan’ wrangled with ‘Bhoot Part One: The Haunted Ship’. All these films didn’t worked at the box office.

It looks like even 2021 will open with a huge clash and this time with three big films will be coming together. This time also Ajay and Deepika will be wrangled again on Valentine’s Day 2021. And this time  Akshay’s film will also be joining this clash. Ajay’s recently announced film ‘Kaithi’ remake, Deepika’s next film with Shakun Batra and Akshay’s ‘Atrangi Re’ are set to release on the same day next year.

Recently, Ajay shared the news of his next film on social media and took the internet by storm. With that, he captioned, “Yes, I’m doing the Hindi remake of the Tamil film ‘Kaithi’. Releases on February 12, 2021 🙏 @RelianceEnt @DreamWarriorpic @ADFFilms @Shibasishsarkar #SRPrakashbabu @prabhu_sr @Meena_Iyer.”

Bollywood Khiladi’s film was announced recently which stars Sara Ali Khan and Tamil cinema actor Dhanush. Though the Khiladi Kumar has a special appearance in the film but his presence will indeed make a difference. Whereas, Deepika’s film, also stars ‘Gully Boy’ actor Siddhant Chaturvedi and ‘Pati Patni Aur Woh’ actor Ananya Panday, which was announced much in advance. All three films will be coming together and will have some impact on their respective collections but it will all depend on reviews.

Well, it will be definitely interesting to see three superstars clashing at the box office.