Home Reviews Ajeeb Dastaans Review: Exquisite acting by each actor in the anthology by... Majnu revolves around an arranged loveless marriage of an influential local kingpin, Babloo (Jaideep Ahlawat) and daughter of an MLA, Leepakshi (Fatima Sana Shaikh).  Babloo makes it clear that he wants nothing to do with her new wife. After his confession, Leepakshi chooses to defy societal norms and seek happiness outside of marriage in a slew of affairs.

Shashank’s movie takes on hypocrisy, lust and desire. Jaideep and Fatima are quiet convincing in their roles.

Khilauna is an intense class-divide story featuring Nushrratt Bharuccha. Meenal (Nushrratt) is a street smart house-help with a her kid sister Binny (Inayat Verma) under her care. After electricity is cut from her house, Meenal decides to get help from a man who claims to offer her a job, but his intentions aren’t pure. Raj Mehta’s Khilauna is the most shocking short out of the compilation as it is a keenly observant film on how the lower class is pushed to inhuman levels in their fight for basic human rights. Mehta’s thought provoking movie is elevated Bharuccha’s awe-inspiring performance.

Geeli Pucchi features Aditi Rao Hydari and Konkana Sen Sharma in the lead. The movie follows the seemingly mundane life of Bharti (Konkana) who is the only woman in a factory full of male workers. Her not so happening life changes when she is passed up for a promotion which is offered to a newcomer Priya Sharma (Aditi) who is also an ideal wife in an upper-class Hindu family.

The movie shows the two women on completely different sides of a male-dominated workplace, eventually opening up about their struggles. 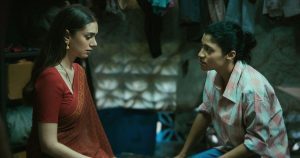 Neeraj tells the story through a lens of caste and class and takes on multiple subjects. The movie is astonishingly good and is driven by its characters, not by its plot.

Aditi and Konkona delivers every line and gesture with such perfection that the audience will not be able to take their eyes of the screen. They have pulled of dramatic transformations to essay their roles.

Irani’s Ankahi features Shefali Shah, Manav Kaul and Tota Roy Chowdhury is the lead role. The story of the movie revolves around Natasha (Shah), the mother of a teenage daughter who is slowly losing her sense of hearing. Her marriage with her husband (played by Chowdhury) is on the rocks as Natasha adapts the sign language but he isn’t as invested. Hence Natasha seeks compassion in a new acquaintance Kabir (Manav).

Shefali and Manav’s performance tend to move the audience as they express themselves perfectly in the absence of dialogues. Irani’s part looks at marital rifts with empathy and paints a sensitive portrait of its characters’ human need for love.

Overall, the movie is a series of twisty films that defy expectations at every turn. All of the four stories are very engaging as they are all about complex human relationships, supercharged by layers of social commentary. The impeccably directed stories keeps people hooked with the acting of the starcast. The movie is currently streaming on Netflix.

Ajeeb Dastaans Review: Exquisite acting by each actor in the anthology...

Deepika Padukone and Sanjay Leela Bhansali not on good terms because...