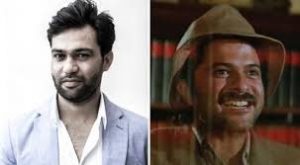 Bringing the iconic character of Mr. India back to the screens, ‘Bharat’ director Ali Abbas Zafar is all set to make a remake of ‘Mr. India’ in collaboration with the production company Zee Studios.

“Excited to partner with @ZeeStudios_for an epic trilogy #MrIndia! It is a huge responsibility to carry forward an iconic character loved by everyone. Currently, working on the script, no actor has been locked till now. Once we lock the first draft of the script, casting begins!” tweeted Ali Abbas Zafar.

Ali is currently working on the script of the film and will soon sign in actors for the film after completing the script. The original film ‘Mr. India’ that featured Anil Kapoor in the lead was one of the first sci-fiction films of Indian cinema and was released in 1987.

‘Mr. India’ and ‘Mogambo’ that continue to be engraved in the hearts of cinema lovers. ‘Mr. India tells the story of a poor but big-hearted man (Anil) who gives shelter to orphans. After discovering his scientist father’s invention of a device that would make the user invisible, he fights to save the children and the country from a villain named ‘Mogambo’, an unforgettable role played by late evergreen actor Amrish Puri.

The film gained a lot of appreciation from the audiences at the time of its release and even after 23 years of its release, it continues to be one of the most iconic Bollywood films.

Well, if ‘Mr. India 2’ goes according to plan, this will surely be one interesting watch.