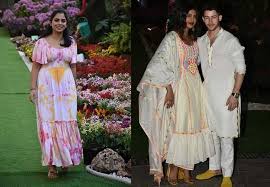 Isha Ambani and her husband Anand Piramal hosted an early grand Holi bash in Mumbai on Friday evening and Priyanka Chopra, who is great friends with Isha, wouldn’t have missed it. Priyanka landed up with Nick Jonas where they made a stellar entry at the party venue. Nick and Priyanka were joined by Katrina Kaif and Vicky Kaushal, among others at Isha Ambani’s Holi celebration.

Nick Jonas, who clearly had a blast, shared a few happy pictures of holi on Instagram and wrote: “My first Holi! (Five days early) So much fun celebrating with such incredible people here in my second home in India!”

Priyanka can be seen playing with colors with Katrina and Vicky and can be seen as amusing to the dhol beats together.

Nick Jonas also added this adorable picture of him with Priyanka on his Instagram handle with the caption, “She makes me smile a lot  #holi.”