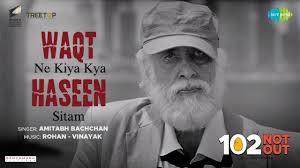 Bollywood Industry  lost its two actors Irrfan Khan and Rishi Kapoor. 53-year-old Irrfan took his last breath on April 29 and when everyone was still mourning his loss another news of veteran actor Rishi’s death took place on April 30.

For  Amitabh Bachchan, it was tragic as he lost his ‘102 Not Out’ and ‘Piku’ co-stars. Amitabh even paid an emotional tribute by singing the song “Waqt.. Waqt ne kiya kya haseen sitam.”

Big B shared a collage of photos with both the actors and wrote, “The death of an elder celebrity vs death of a younger .. the grief of the latter more intense than that of the former .. why ..?The younger more tragic Why the loss of the young seems more tragic than that of the older .. Because you lament the loss of opportunity in the latter .. unrealised possibilities.”

Rishi Kapoor took his last breath in Sir HN Reliance Foundation Hospital in Mumbai while Irrfan passed away in Kokilaben Dhirubhai Ambani Hospital. Big B could not attend the funeral ceremony of both the stars but his son Abhishek Bachchan was present there to support  Rishi’s  family.