On Tuesday, Prakash Javadekar, Minister of Information and Broadcasting, announced the news on Twitter that Bollywood megastar Amitabh Bachchan was unanimously selected to be awarded the prestigious Dadasaheb Phalke Award. And now the actor has responded on receiving the honour.

Amitabh took to Twitter and wrote that he was “humbled” and “grateful” on receiving the award. He said, “There is a paucity of words searching a response .. for the generosity of words that pour in.. I am but deeply grateful and most humbled .. my sincerest gratitude.”

In the lead up to the announcement made by the government regarding the award being bestowed on Big B, the actor will receive a Swarna Kamal (Golden Lotus) medallion, a shawl and a cash prize of Rs 10 lakh.

After the announcement was made, people from all walks of life congratulated Amitabh on social media. Amitabh’s kids Shweta and Abhishek Bachchan were overjoyed after the announcement was made. In fact, a plethora of politicians and film fraternity members also showered love and praise on the star. From Ayushmann Khurrana to Rajinikanth, artists from various media platforms reacted to the news with enthusiasm and affection. 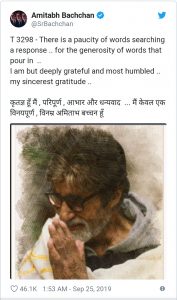 Shooting of Dabangg 3 has started.