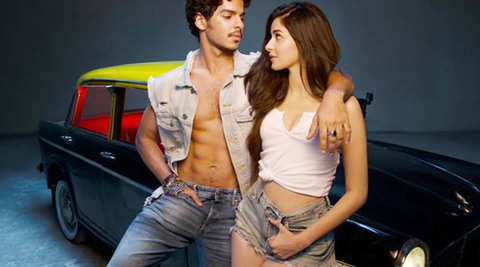 Ishaan while sharing the look poster on his instagram wrote, “A dear shaana, an item, a taxi, and a night story.” Apun is bringing the most romantic picture of 2020. “Empty yellow set is made in Mumbai. The film will show the ups and downs in life after the meeting of a girl and boy one night.

The film’s director Maqbool said, “I am nervous to start the film with these young talent.” The film will be released on 12 June 2020. In the look poster, the chemistry of Ananya and Ishaan looks fantastic. Ali Abbas will jointly produce the film with Zafar Ji Studios.
Regarding the film, Ali Abbas Zafar said, “Maqbool, Himanshu and I worked on the story of Khali Pilli for almost a year. Now that we thought it was all set, we went to these young talent “. Ananya has made her debut with  Student of the Year 2 . She had many film offers since her debut. Ishan khatter has seen in Dhadak and Beyond The Clouds