Remember how Siddhant Chaturvedi’s reply to Ananya Panday on nepotism in a 2020 roundtable interview became a viral sensation, making way for many memes and short clips on social media? Well, Ananya has finally broken her silence on her statement saying that she didn’t intend to come across the way she did during the interview. During the panel, Ananya shared her definition of struggle and take on nepotism, saying, “I have always wanted to be an actor. Just because my dad has been an actor, I will never say no to an opportunity to act. My dad has never been in a Dharma film, he never went on ‘Koffee With Karan’. So, it’s not as easy as people say. Everyone has their own journey and their own struggle.”

Addressing the infamous interview on on Social Media Star, Ananya said, “Basically, I agree. But also I think that Sid and I were kind of saying the same thing. Sometimes, in interviews, as you can see, I’m very overwhelmed. If I had to go back, I would probably change the way I said something. We were laughing about it later. Sid and I are really close. We have no weird thing about this. People made it something bigger and it became meme-worthy. Genuinely my intention wasn’t like what came across.” 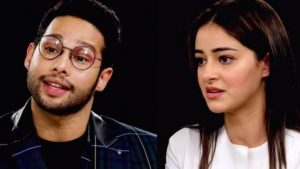 Earlier, Siddhant had also opened up about the nepotism jibe with Ananya. “It was a topic of nepotism and I was the last one to speak. It so happened that she spoke before me. And I just concluded so it was a conclusive statement. If you actually think about that line, it only implies the start point and end point of the struggle. I guess, internet made a thing out of it. They made memes and edited it to make it look like I’ve got a thug life. But it was not meant to be taken like that,” he had said.

Ananya and Siddhant will be seen in Shakun Batra’s directorial next alongside Deepika Padukone.