Anil Kapoor and his son Harsh Varrdhan Kapoor are quite busy these days, as their film Thar is due to be released on May 6th, and the father-son fusion are doing everything in their way, to promote the film. Throughout this, rumours regarding their next movie, a biography of Olympic gold medalist Abhinav Bindra, have prevailed. According to reports, Harsh Varrdhan would playing the part of Abhinav Bindra in the film. And now, Anil has finally spoken out about the film, stating that he is excited to see it. 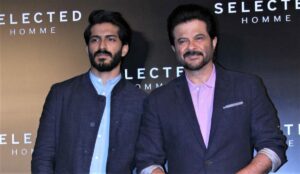 When questioned about the project at a recent event, Anil remarked, “That’s the next thing that I’m highly passionately enthused about.” We’re now in pre-production because the film necessitates meticulous planning. So, I believe that’s the next film both of us are looking forward to, at least I am, and I’m sure Harsh is as well.” Harsh, on the other hand, stated that he is currently focused on Thar and will take a break after the film, after which he will take into account his next project.
To be honest, I haven’t given it much thought, but my current concentration is on delivering this picture. To be honest, it’s difficult to imagine any other character right now. “I just want to finish this project, take some time off to reset my brain and get back to being myself and myself again, and then go,” harsh concluded. Speaking of Thar, it’s the debut for Harsh as a producer. Thar’ also stars Fatima Sana Shaikh and Jitendra Joshi, in addition to Anil Kapoor and Harsh Vardhan Kapoor. It’s a thriller movie and is to be released via one of the biggest OTT platform, Netflix. Before Thar, the father -son duo was seen together in AK Vs AK. Harsh has a significant and a major role to play in Thar and his character will be known as Sidharth. It’s a thriller suspense where in a young aged lad, goes in search of work to Rajasthan, and end up solving mystery of his family’s de