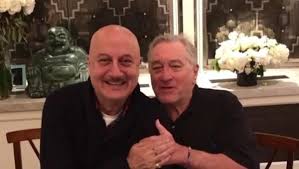 Veteran Bollywood actor Anupam Kher has turned 65 today. For the last two years, the actor celebrated his birthday with Hollywood legend Robert De Niro who had done movies like, ‘The Irishman’, ‘The Inter’, ‘The Family’, ‘Joker’ and others. The actor is currently in New York where he rang in his birthday with the megastar and cut the birthday cake.

Mr.Kher shared a video on social media in which he is seen celebrating his special day with Niro. The actor had sent an invitation to Robert De Niro to celebrate his birthday with him and he accepted.

The video shows Anupam cutting the cake with Niro singing ‘Happy Birthday’ to him. He captioned the video saying, “Nothing can be more magical for an actor than to be able to spend quality time on your birthday with the ‘God of acting Robert De Niro’ third year in a row. I am humbled that Mr. De Niro accepted my lunch invitation. It was magnificent. Isko kehte hain ‘Kuchh Bhi ho Sakta hai’ ka baap.”

Last year, Anupam Kher celebrated his birthday with Robert De Niro. He had shared glimpses from the bash and tweeted, “I had a great time. And to be able to spend my birthday 2nd year in tow with my friend Robert De Niro is stuff made out of dreams. His warm hug has a blessing in it.”

Anupam Kher and Robert De Niro have been great friends after they starred together in the 2012 movie ‘Silver Linings Playbook’. The film starred Jennifer Lawrence and Bradley Cooper as leads.