Posani Naga Sudheer Babu, a professional badminton player and South star has announced his next venture, Production No 5. Though the actor is busy with quite a lot of other projects, he ahs signed Production No 5 of acclaimed production house Sree Venkateswara Cinemas LLP (A Unit Of Asian Group). Narayan Das K Narang and Puskur Ram Mohan Rao will produce the movie. 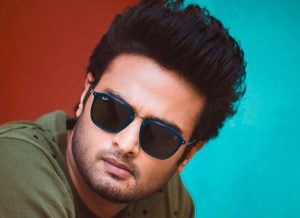 The actor announced on his social media that he is in the talented hands of acclaimed actor and director Harsha Vardhan and adds on, “This is going to be a challenging journey for me and the team… Safe to say that it’s something that I haven’t tried yet”.

Well-known actor and writer Harsha Vardhan will direct the film which has been announced officially today. Billed to be a romantic family entertainer with a different concept, Sonali Narang and Srishti are the presenters of the film.

Sree Venkateswara Cinemas LLP, a unit of distinguished distribution and exhibition company Asian Cinemas, has been making consistent announcements of their next production ventures. Recently they announced a film with acclaimed actors Dhanush and Sekhar Kammula’s combination which will start rolling soon. Naga Chaitanya’s Love Story is the next release of the production house which has also lined up some other various exciting projects.

Reportedly, the shooting of Production No 5 flick of Sudheer Babu and Harsha Vardhan will begin in August.

The talented Tollywood actor Sudheer Babu is done with the shoot of Sridevi Soda Center and he is busy with the shoot of a romantic entertainer titled Aa Ammayi Gurinchi Cheppalani Undi. It is said that Sidheer Babu loved the narration of the Sree Venkateswara Cinemas LLP’s next film and that is why gave a nod ahead to shoot for the Production No 5. Probably the film is set to release in the second half of the next year according to reports.