Earlier, the makers of the 2007 family drama ‘Apne’ had hinted that there is a possibility of a sequel to the movie taking place. Now, reportedly, the news of the sequel going on floors in March 2022 is doing rounds. According to the latest reports, the makers of the movie have announced that the venture titled Apne 2 is all set to go on the floors in March 2022. The movie stars the fantastic trio of father and sons; Dharmendra, Sunny Deol and Bobby Deol in the lead roles. 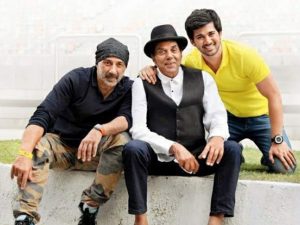 Apne 2 will be directed by Anil Sharma and will be produced by Deepak Mukut of Soham Rockstar Entertainment.

Sunny Deol’s son, Karan Deol is also rumoured to be making an appearance in the film.