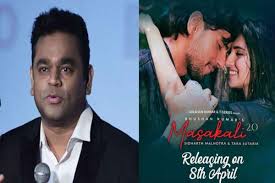 Oscar-winning music composer and singer AR Rahman reacted to the new version of his 2009 song ‘Masakali’ and took a dig at it saying he didn’t use any short cuts to create the song. Recently, Sidharth Malhotra and Tara Sutaria starrer ‘Masakali 2.0’ dropped on YouTube and became the topic of discussion.

The song turned into a meme, as fans felt it didn’t do justice to the original song.  AR Rahman also reacted to the song, and also opened up about the song he made years ago.

Stating on social media AR Rahman said, “No short cuts, properly commissioned, sleepless nights, writes and re-writes. Over 200 musicians, 365 days of creative brainstorming with the aim to produce music that can last generations. A team of a Director, a Composer and a Lyricist supported by actors, dance directors and a relentless film crew. Lots of love and prayers A.R. Rahman.” He captioned the note saying, “Enjoy the original #Masakali.”

On new song ‘Masakali 2.0’, fans expressed their disappointment about it. Whereas,  actor Meera Chopra also reacted to the song and tweeted, “Just saw #Masakali2 , matlab plz somebody tell me what was the need to do this. I mean why????”

The new ‘Masakali 2.0’ has been released by Tseries and sung by Tulsi Kumar and Sachet Tandon, with music by Tanishk Bagchi.