Home Gossips Arjun And Malaika to come together for Koffee With Karan ? While the upcoming season of Koffee With Karan has created a lot of mystery suspense and mystery, the shooting for the season has been started. The host Karan Johar has shared a glimpse a few days back of the show and about how it will look like. There are lot more suspections about the guest list and about who is comming as this season is promising to give a lot more hot and sizzling gossips. When it comes to Koffee with Karan, Arjun Kapoor and Malaika Arora are regulars. The hot Karan Johar-hosted chat show is entering its seventh season, and all eyes are on the probable guest list. While Janhvi Kapoor and Sara Ali Khan have already begun filming for their episode, Ranveer Singh and Alia Bhatt are expected to appear in the season’s first episode. Arjun has been seen frequently in Koffe With Karan’s previous session whereas Malaika is totally the glam house of Koffee With Karan, as she has been in the jury council of Koffee With Karan also. Arjun Kapoor and Malaika Arora are suspected to participate together on the show this season, according to reports. “The guest list for the season is still being revised,” a source close to the development told, ” only 5-6 pairs have been confirmed so far.” Many are in discussions to determine their availability and dates. The town’s lovebirds are having discussions. “Neither Arjun nor Malaika have given their approval.” Arjun and Malaika have been open about their love for them other and made their relation public on Instagram three years ago. Well if Malaika and Arjun confirm about them coming together on the show, this will be their first appearance together officially on Koffee With Karan.
Arjun Kapoor made multiple appearances in the fifth season of Koffee With Karan and also appeared in the sixth season. Malaika, on the other hand, has been a Kof 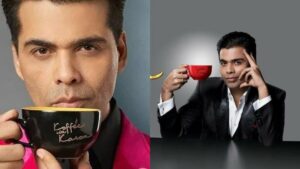 fee regular and has made guest appearances on the show. If Karan is successful in bringing the two together this season, it will be fascinating to see. Arjun and Malaika are currently one of the most talked-about couples in Bollywood. If the two agree, they will be the first real-life couple to appear on the couch this season. Well the shooting has been started and as announced by Karan Johar himself, that the upcoming season will be available on Disney Plus Hotstar and not on Television.