On Tuesday, Producer Ashoke Pandit announced that he would be backing a film based on the life of gold medal-winning athlete Pinki Pramanik. The 64-year-old filmmaker said that the movie will be a tribute to all athletes. The story of Pinki will be written by Priyanka Ghatak. The cast is yet to be revealed. Ashoke Pandit said in a statment, “Writer Priyanka Ghatak read about this athlete and came up with this thought. We worked on the story for nearly 6-7 months and did our research. We feel this story has to be narrated to the world. We have been in touch with Pinki Pramanik, met her in Kolkata and signed the rights for making the film. Very soon the cast and entire technical crew will be on board. We go on floors very soon.” (IANS)

He further added, “The film is a tribute to all athletes in the country. Most athletes come from small towns without any godfathers, big money or having family connections in that field.” 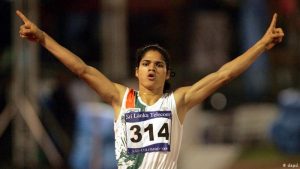 Pinki Pramanik who hails from Purulia, West Bengal was a member of the Asian Games gold medal and Commonwealth Games silver medal-winning quartet in the 400m relay event in 2006. She was also surrounded with controversies in the year 2012, when her woman friend accused her of rape and gender misrepresentation. Pinki was in the custody for 25 days. 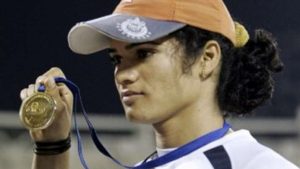 The former athlete was made to undergo sex verification tests to confirm her gender. In 2014, she was cleared of rape charges by Calcutta High Court.

Talking about if the movies will be showing the controversies she was in,
Pandit said, “My take has always been issue-based subjects. How an achiever from the small town of Purulia reaches to that level, and how that dream comes down shattered. It’s the story of the rise and downfall of an achiever. We will talk about the system, the tragedies, and everything.” The makers of the upcoming movie have also released a poster carrying Pramanik’s photo with a line that says, “Most controversial story of a ‘woman’ athlete who was accused of being a ‘man’ and implicated in rape charges.”