The handsome hunk Rahul Jatin has made his debut in the music industry with a groovy yet melodious single ‘Aankhon Ke Ishaare’. This song is sung and composed by Raahul Jatin.

Rahul is the son of famous Indian Music Composer Jatin Pandit, who has composed music for movies like ‘I am 24’ and many more. 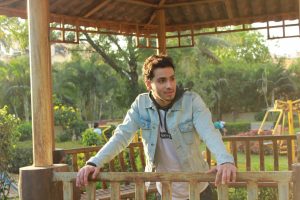 In this foot tapping number, the audience will see Rahul and Simone doing an intimate dance and raising the temperature of the music video. This song is written by Kumaar, mixed & mastered by Eric Pillai.

Raahul has been learning classical music since he was 5, under the guidance of his father Jatin Pandit. Not only this, but he has also taken a formal training of Bollywood freestyle dance from Shiamak Davar. And has learned theatre from Lee Strasberg Theatre and Film Institute in Los Angeles.

Sharing his experience about his debut he shared, ” It takes 4 days to compose this melody after that, I roped in a few of my American friends who are music producers and we punched in the groove. The video was a true learning experience for me, we shot it whole in one day. Tiring but genuinely exciting. I have done backflips, and cartwheel in the song. Digital music is just not listening to a song- it’s seeing as well. You have to be more than just a singer for the audience to connect with you. The song is also very different from the trending ones.”

This song is going to be released tomorrow on 18 April.