After much anticipation and fanfare, the Avatar 2 teaser trailer was finally published digitally. On May 6, those who saw The Way of Water video with Doctor Strange in the Multiverse of Madness only contributed to James Cameron’s project’s excitement. Avatar: The Way of Water is set ten years after the events of the first film and chronicles the tale of Jake, Neytiri, and their children. One of the most talked-about films of the year is the sequel to the film starring Zoe Saldana, Sam Worthington, Sigourney Weaver, Stephen Lang, Cliff Curtis, Joel David Moore, CCH Pounder, Edie Falco, Jemaine Clement, and Kate Winslet. There are reasonable concerns that public enthusiasm for all things Avatar has waned in the decade following the film’s historic theatrical release. However, the Na’vi Nation looks to be faithful. Fans went crazy when the Avatar 2 video was released online, and social media platforms were humming with anticipation. The Way of Water video, on the other hand, makes them feel elderly. After all, the sequel arrives a decade after the first. Netizens have been celebrating by sharing humorous Avatar memes and jokes over social media. 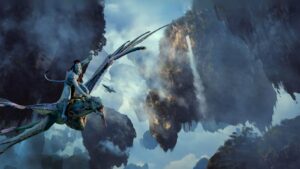 The Avatar 2 teaser clip offers enough action to keep fans interested. The nearly minute-and-a-half movie features the breathtaking terrain of Pandora, an Earth-like habitable extrasolar moon made of the gas giant Polyphemus from the Alpha Centauri system, which was previously seen in the original film. Pandora looks lovely in the trailer, and it’ll be fascinating to see more of the world as Cameron brings viewers underwater.
Avatar first aired in December 2009, at a period when ticket prices were much lower than they are now. The film, on the other hand, had an unprecedented run in theatres, playing for over ten months, thanks to repeat viewings and VIP screenings.The unprecedented success of ‘Avatar’ prompted theatre owners to accelerate the rollout of digital cinema so that their venues could screen 3D films. Cameron has brought up to new technology once again for the sequel, and it is supposed to be done underwater. On December 16, Avatar 2 will be released in English, Hindi, Tamil, Telugu, Kannada, and Malayalam.

After their court wedding in February, Farhan Akhtar and Shibani Dandekar will do grand...