Synopsis: A young boy, Madan (played by Ankan Mallick), lives with his mother and grandfather. After Madan learns from his mother that his absent father Sadashiv (played by Anurag Kashyap) used to play flute, he also vows to become a flutist like him.

Review: Writer-director Hari Viswanath’s debut Hindi feature drama is inspired by Augusto’s award-winning Tamil play ‘Vanavillin Ambbu’. The movie revolves around an eight-year-old boy Madan and his fractured family. Madan gets inspired by his friend David’s (Deepro Sen) piano skills and decides to follow his father Sadashiv’s footstep who was also a flutist. His mother gives him a flute and tells him that his father is a big flutist in Dubai. Madan gets convinced and tries to excel like his old man. But there are certain truths hidden from Madan about his father’s past.

Director Viswanath’s way of telling the story is very simple yet intriguing. The narrative progresses as it gives glimpses of the bond between two neighbourhood friends and their desire to become musician just like their respective father’s. The second half of the movie focuses on Sadashiv and his flute-learning lessons. The story keeps the audience engrossed with several elements. Rituparna Sengupta owns the screen with her performance as a mother who wants her son to make something out of his life and as a wife who is still hanging tight for her husband to return while being a dutiful daughter-in-law to her father-in-law (Masood Akhtar).  Coming to the child artists, both of them, Ankan Mallick and Deepro Sen, impress the audience with their innocence. Their genuine performances are quite convincing. 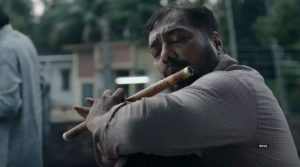 Anurag Kashyap who enters post interval does not let the audience down. He makes his presence felt like Rituparna as the audience can clearly see him as a father and a husband who is struggling hard to continue living the lie his wife has told their son. The supporting cast has helped in pushing the narrative forward. ‘Bansuri’ is a one-time watch movie which has its heart at the right place. It may not leave a lasting impact but the sincere performances of the cast do impress the audience.