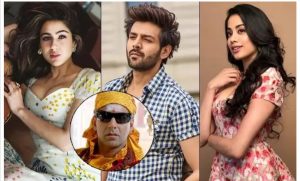 Ever since the makers of Kartik Aaryanstarrer ‘Bhool Bhulaiya 2’ released the posters of the talented actor stepping into the shoes of Akshay Kumar fans have been eagerly waiting to know more about the film.
According to a report in Pinkvilla, Sara Ali Khan and Shraddha Kapoor have been approached by the makers of the film to play the lead in the sequel. The report quoted a source saying, “The makers were keen to cast Shraddha Kapoor in the lead role opposite Kartik on the show. They had even approached Shraddha but things did not work out as she had prior commitments. Shraddha did show her interest but given her date issues, things did not move further.”
Furthermore, the source further added that even Sara was approached with the lead role but due to prior commitments and jam-packed work scheduled even she had to pass the offer.

Meanwhile, the film which is helmed by Anees Bazmee is currently slated to release on 31st July next year.