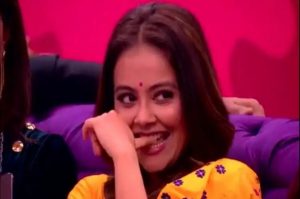 The entertainment quotient on Bigg Boss 13 is reaching new height and each day is coming up with new mind-boggling twists. From Rashmai Desai and Arhaan Khan’s love affair and revelations to Asim Riaz becoming the new captain, Shefali Bagga’s chaos in the house, Sidharth Shukla and Shehnaaz Gill’s love-hate relationship, Paras Chhabra and Mahira Sharma’s growing proximity and Vikas Gupta becoming the game changer, this popular reality show has witnessed some intense drama in the BB house.

Adding on to the drama and entertainment quotient, it is reported that Bigg Boss 13 will witness a new turn during the Weekend Ka Vaar as a former contestant will be re-entering the show. We are talking about Devoleena Bhattacharjee who was among the first contestants of BB13. According to media reports, Devoleena will be making her way inside the BB house this weekend. To note, Devoleena had left the house owing to medical issues and was getting a medical treatment post her exit. Interestingly, given Devoleena’s medical condition, former Bigg Boss 11 contestant Vikas Gupta had entered the show to continue the actress’ game.

With Devoleena coming back in the show, she is likely to change the dynamics in the house. To begin with, her entry will mark Vikas Gupta’s exit from the show. Certainly, a lot has changed inside the BB house post her exit. Besides, Devoleena’s BFF in the house Rashami has been going through an emotional turmoil post Arhaan’s truth was revealed on national television. While Devoleena had slammed Arhaan for hiding his first marriage, we wonder if she will change his equation with Rashami post her re-entry.