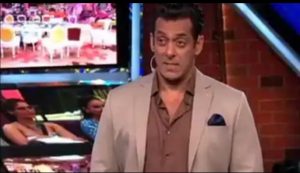 Bollywood star Salman Khan began his reality show Bigg Boss on a rather dull note this year. However, it seems to have picked up pace over the past few weeks and has now reportedly been extended by five weeks.

A Pinkvilla report claimed that Bigg Boss 13 will not end in January 2020 and has been extended by five weeks, adding another month to the usual tenure of the show – 90 days. It added that the concluding date for the show is yet to be finalized but it may end in February or March. Meanwhile, in a promo for Saturday’s episode, Salman was seen threatening Sidharth Shukla and Asim Riaz that things would have been different if he was inside the house. “Ye jo dhakka dene ka session shuru hua hai. Thank God mai yaha pe hu, ghar mein nahi. Agar mai part hota to aadhe se zyada ghar aaj khali ho chuka hota. Bina koi provocation, violently dhakka dene ka agar mere paas ye right hota to aaj, isi waqt mai ek sadasya ko ghar se nikal sakta tha.(Thank God that I am not inside the house, what is this pushing session? If I were a part of the game, half the house would have been empty by now. If I had the right to push anyone without any provocation, would have pushed one out of the show),” Salman says in the video leaked online. Salman even challenged Sidharth for a duel. “Shukla ji, bade lambe chaude ho aap. Kabhi aazmana chahoge aap? Bahar aa jaao to aazma lena kabhi. (Shukla ji, you are quite huge and tall, do you want to test your strength? Try sometime once you are out of the house),” he said. Sidharth had said during one of his discussions over Asim that he is too strong to allow Asim to survive in a fight.
In yet another promo, Salman was seen questioning Shefali Jariwala over her captaincy. “Jo aapko dekhna chahiye tha, wo aapne dekha. Aapne dekha pushing and pulling. Aur task ke baad aapne kaafi baar bola hai ki ‘maine apni aankho se dekha hai ki Sidharth ne pull kiya’ Lekin Bigg Boss se baat karte waqt aapka pehla statement tha ‘Himanshi ka kehna hai dash dash dash..Kyuki maine nahi dekha’. Wahi se disadvantage shuru ho gaya. (You saw what you had to, you saw the pushing and pulling. After the task, you kept announcing you saw saw the it all with your own eyes and when Bigg Boss called you, you began with ‘Himanshi said, because I did not see’. That is where disadvantage began).”