Home Uncategorized Bigg Boss 13 Teaser Release: This Twist Will Be On The Show,... The teaser of TV’s most popular show Bigg Boss 13 has been released. In the teaser, Salman Khan is seen in the role of station master. Before this, Colors shared a photo of Bigg Boss 13 on Twitter. Now the teaser of the show has been released on social media. There is no Information  when the show will start, but Salman Khan has revealed two important secrets related to the show in the teaser.
Salman Khan is seen sitting in a train moving at a high speed in the teaser. The speed of the train is telling that this time the show will be full of tremendous twist. Salman says in the video, ‘Please note that this time the Big Boss car will be Star Special. Will deliver to Finale immediately in four weeks. Even after that, celebrities will make kurta tear. Come soon or regret it. Stop, stop, speak. Come soon friend.
What will be special in the show
In the teaser of Big Boss 13, it has been confirmed that there will be only entry of stars in the show. The biggest twist in the show is the stars reaching the finals in four weeks, but even then the war between the celebs in the show will continue. Salman Khan sitting in the train and looking in the station master’s getup is also indicating that this time the theme of Big Boss’s house may be related to it. Every time the interior of the house will be based on a very special and special theme
In the teaser of Bigg Boss 13, Salman Khan has not revealed the start date of the show. But the date of 29 September is in discussion on social media, according to the report, the show can start on this day.
The list of celebrity contestants joining the show has not been revealed yet. But the names of many stars remain in the discussion, including the names of Chunky Pandey, Rajpal Yadav, Karan Patel, Shivin Narang, Karan Vohra, Tina Dutta, Deblina, Ankita Lokhande.
This time the set of Bigg Boss 13 has been made in Mumbai’s Film City itself. Every time the show was shot in Lonavala. Let the makers make new plans to bring the show to the top in the TRP chart. According to the report, the funniest twists will be seen in the show this time. 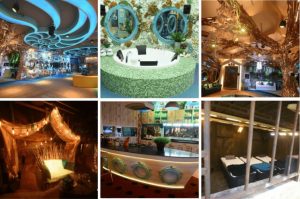