Each episode of Bigg Boss 14 has been grabbing eyeballs and the show has been breaking its own record in terms of controversies every now and then. Now, in a shocking development, one of the strongest contestants, Eijaz Khan, will have to leave the game show. Eijaz who has a huge fan following was considered as a tough competitor in the house of BB14. 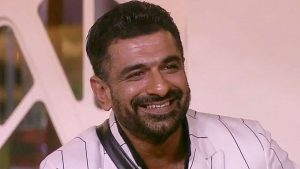 According to a promo of the upcoming episode, Eijaz is seen standing alone in the theatre room whereas the other housemates are gathered in the living area. Bigg Boss then announces, “Eijaz was the first person to enter the house this season and has spent 106 days here. But he needs to leave the show mid-way.”

This leaves the others shocked and a few of them, including Arshi Khan, can be seen breaking down. Arshi and Eijaz have shared a love-hate relationship throughout the game. Initially, they bonded quite well, however, the duo has been fighting for some time now. According to a recent report , Eijaz has some prior commitments, for some other work which is why the makers have roped in Devoleena as his replacement on the show. Also, Eijaz will not return to Bigg Boss 14. Meanwhile, no one was evicted on Sunday and host Salman Khan announced during Weekend Ka Vaar that Nikki Tamboli, Rahul Vaidya, Sonali Phogat and Rubina Dilaik will continue to remain unsafe.

The promo also shows that in the coming days, the makers of the show will confiscate housemates’ rations, forcing them to earn their food through hard work. A few days ago, the contestants were admonished for not taking the tasks seriously and routinely flouting the rules of the show.