Home Latest Buzz Bobby Deol to play the main villain opposite a renowned superstar in... The younger audience are waking up to Bobby Deol’s talent all over again as his Class of ’83 on Netflix and ‘Aashram’ on MX Player got very high ratings on the popularity charts. Now latest report suggests that Deol may be seen in a Baahubali level project in the south. 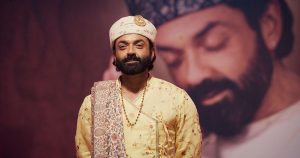 Bobby Deol made his digital debut in the past few years. Currently he is witnessing a second wind in his career because of the OTT platforms. He won accolades after his role in popular series ‘Aashram’ was loved by the audience. This series had not one but two successful seasons. Now, Bobby Deol will be venturing into the South India film industry.

According to a latest report by Bollywood life, Deol is in talks for playing the main villain in a big scale movie down in the South. This movie is expected to be made on the level of Baahubali or 2.0. Moreover, a very well known superstar will be playing the lead role in this project. The identity of that actor is yet to be revealed.

Currently Bobby and his team are having a look at the details of the project, after which he may sign on the dotted line. The actor wants a few improvements to be made in his character so that it can appear as powerful as the film’s hero. If media reports are to be believed, the makers and the film’s hero are willing to make the desired changes by Deol.

Deol was last seen in the superhit Diwali release Housefull 4 in 2019. He will reportedly be seen next in the movie Apne 2 which is a remake of the 2007 drama of the same name.

Now everyone is excited to watch Bobby in this upcoming south biggie.