As several mega projects are going to release their forthcoming movies. Here is one of the most awaited movie of the Bollywood Superstar Salman Khan’s Antim: “The final truth” trailer released today. 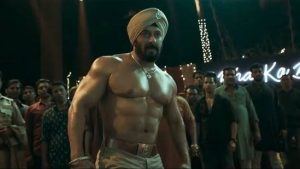 The trailer reveals the first-ever look of both the stars Salman Khan and Aayush Sharam from Antim: “The Final Truth”, Where the audience was waiting and expecting the full of energetic and power-packed action. At the same time, the film makers dropped the trailer today as expected by the audiences. In this both, the stars are against each other where Salman Khan plays a role of Police Officer and Aayush Sharma is seen as a gangster.

Salman and Aayush’s characters face each other, fires on, shirts come off and overloaded dialogues are swapped. Immediately, Aayush’s asks Salman’s, “Tu jaanta hai kya? Apun Pune ka naya Bhai hai (Do you know, I am a new don of Pune)?” The trailer is loaded with full-on action, high-octane background music, and much more. This trailer made everyone grab the big screens. This movie is presented by Salman Khan Films and produced by Salma Khan. The film is set for release on November 26th.

Punjabi Singer B Praak won a National film award under the...