On Sunday, filmmaker Siddharth Roy Kapur said that bollywood will definitely return to Kashmir to shoot films and bring the Valley back to the silver screen like in the 1950s and 60s. 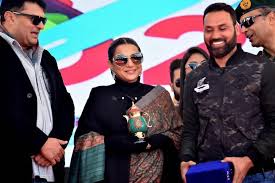 On Sunday, filmmaker Siddharth Roy Kapur along with wife & actress Vidya Balan, and actor-producer Arbaaz Khan attended a two day winter festival at Gulmarg. The festival was organised by the Army in North Kashmir.

Kapur told the reporters, “I say on behalf of the Indian film industry that we will definitely be coming to Kashmir very often in the future to shoot.” Kapur is also the head of the Producers Guild of India.

He praised the beauty of Kashmir and said, “We do not need to talk about how beautiful the location is… we intend to come here very often and bring film crews here. We will see that we are able to bring Kashmir back to Indian screens the way it was in the 1950s and 60s.”

The filmmaker thanked the Army for inviting them and said that the visit gave them an opportunity to experience such a wonderful place.

Kapur further added, “The hospitality of the Army and the Kashmiri people has been incredible.” He told the reporters that Kashmir is a sentimental place for him as his parents happened to have met in the Valley. Bollywood actress and Kapur’s wife, Vidya Balan said, “I hope I get another opportunity to visit Kashmir. I hope I come here for a film shooting.”

Actor-producer Arbaaz Khan also expressed hope that film crews will return to the valley. He said, “There is no reason not to be here, this place is truly amazing.”

Besides cultural performances by renowned artists of the valley, the festival by the army conducted many activities like skiing, snowmobile, ATV race and snow cycling.

Major General Virendra Vats, General officer commanding (GoC), Dagger Division, said the event was organised to provide a platform to local artists to showcase their talent and to provide a boost to the tourism industry in Kashmir. The festival’s aim was to lend support to the people who rely on the industry.