Home Latest Buzz Boney Kapoor and Jahnvi Kapoor to appear together onscreen for this project. Currently in busy shooting for her forthcoming movie Jahnvi Kapoor has got an eminent name in the industry. She made her Bollywood breakthrough with Dhadak. Amidst all these the actress committed to a fascinating project that will mark her first screen appearance with her father Boney Kapoor. The father-daughter pair will appear together on television for the first time, according to producer Sandeep Singh Bedi. It is, however, for a commercial and not for a movie. Boney Kapoor and Janhvi Kapoor will be collaborating for the first time, but it is unknown if they will potray their real life roles on-screen or not.

Sandeep Singh Bedi, aka Ricky Singh Bedi, verified the initiative by posting a picture of the two of them but the specifics of the advertisement were kept a secret. Boney Kapoor, who has primarily worked as a producer and remained behind the cameras will reportedly make his major acting debut in the Luv Ranjan’s movie, starring Ranbir Kapoor and Shraddha Kapoor. The producer appears to be planning yet another on screen appearance and this time alongside his daughter. We have seen them getting papped together several times but this will be the first time we will see them sharing screens together. 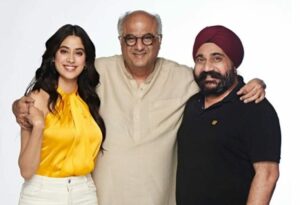 Fans are elated and are eager to know more about the commercial and when will it be released. Speaking of Janhvi Kapoor, the actress is working on a variety of projects. She will next be seen in the OTT film Good Luck Jerry, an adaptation of the Tamil blockbuster Kolamaavu Kokila starring Nayanthara. A number of movies, including Mr. and Mrs. Mahi with Rajkummar Rao and Bawaal with Varun Dhawan, will come after it. There are rumours that the actress will perform a dance number in the Karan Johar-directed film Rocky Aur Rani Ki Prem Kahani, which stars Ranveer Singh and Alia Bhatt in the lead roles. The actress will be seen in a special presence in the Varun Dhawan and Kriti Sanon-starring film Bhediya where Janhvi will potray her character as Roohi.