Popular teaching application Byju’s has temporarily hit a pause on the broadcasting of all the advertisements that feature their brand ambassador Shah Rukh Khan, amidst the alleged arrest of his son Aryan Khan on the charges of being involved in the consumption of drugs. According to the latest reports, the Edtech company recently faced backlash on various social media platforms like Twitter, which ultimately led to the withdrawal of their association with the Bollywood megastar. 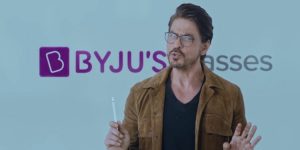 Recently, Byju’s had launched a brand new ad campaign that features SRK, but they have halted all the promotions featuring Shah Rukh Khan for the time being. The edtech company, which has been doing really well, does not want to affect their reach by showcasing a star whose son has been charged in an alleged drugs case.

However, no such statements regarding dropping SRK as the brand ambassador has been made by Byju’s yet.

Mrunal Thakur wraps up the shoot of ‘Pippa’ says: ‘This one...