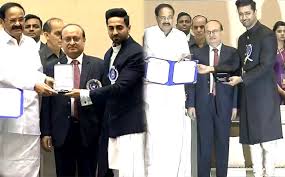 Many popular actors, directors, singers were present in the award function, such an Akshay Kumar, Vicky Kaushal, Aayushman Khurana and many.

If we talk about the year 2019, Aayushman Khurana gave 3 super-duper hits one of which was Andhadhun.

If we talk about Dadasaheb Phalke award, Amitabh Bachman won the prestigious award but he could not come to receive it as he was not in the best of health, he poured his sadness of not being able to attend the award show by addressing people on tweeter saying “Down with fever ..! Not allowed to travel .. I will not be able to attend National Award tomorrow in Delhi .. so unfortunate .. my regrets ..”

The year was a success for Aayushman Khurana, let’s see if the coming year would be the same for him or not.