Due to the outbreak of  coronavirus pandemic and lockdown there was delay in  Ajay Devgn starrer ‘Chanakya’.   Lockdown put it on the back-burner. However Writer-lyricist Manoj Muntashir now has revealed that the film is very much on the cards. Elaborating further, Muntashir he said that Neeraj Panday’sdirectorial venture is based on the ancient Indian philosopher, ‘Chanakya’. According to him, the film requires Devgn to sport a bald look which also means  that he cannot juggle his shoot with another offering. He concluded by saying that the film, which seems worthy of being an Oscar-entry, is too precious to be put on the back-burner. He added that they should roll in the last quarter of 2021. 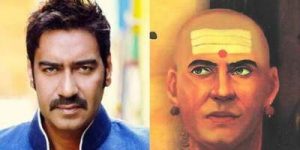 The writer said that he even travelled Bihar, where Pataliputra(now, Patna) is situated, as part of research. For a year-and-a-half, they focused on travelling and reading Chanakya’sbooks, including Kautilya, before putting pen to paper. Talking about Ajay , he was last seen in Om Raut’s ‘Tanhaji: The Unsung Warrior’ which also starred Saif Ali Khan and Kajol in key roles. The film received positive reviews from the audience and the critics as well. Everyone applauded the actors for their wonderful acting.