At  the age of 62 Anil Kapoor is giving tough competition to Jamaican Olympian Yohan Blake as the two were spotted on the running track in Mumbai. The Pagalpanti actor took to social media to share pictures from his meeting with the sprinter who is in the country to promote the Road Safety World Series.

Sharing pictures of himself with the Jamaican sprinter, Anil Kapoor wrote, “Thank you so much @YohanBlake for being so inspiring, passionate & for coming and sharing your craft! It was lovely meeting you and truly one of my most memorable training sessions! (sic).” 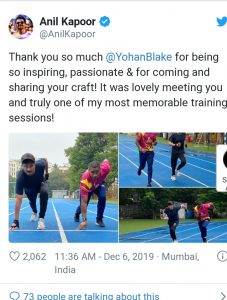 Earlier, the Olympic sprinter visited Salman Khan and Jacqueline Fernandez on the set of their upcoming film. Sharing a picture from their meeting on Instagram, Jacqueline wrote, “Had a great conversation with @yohanblake on his amazing success and all things fitness! Thanks for taking the time to visit our set and all the best for the Olympics 2020 @beingsalmankhan (sic).”
Coming back to Anil Kapoor, the actor was recently seen in Anees Bazmee’s comedy film Pagalpanti alongside John Abraham, and Arshad Warsi. The film also starred Pulkit Samrat, Ileana D’Cruz, Urvashi Rautela, Saurabh Shukla and Kriti Kharbanda, among others.

Anil Kapoor will be next seen in Nohit Suri’s Malang, in which he will be sharing screen space with Aditya Roy Kapur, Disha Patani and Kunal Kemmu, among others. Apart from this, he plays Shah Jahan in Karan Johar’s upcoming period drama Takht. The film also stars Ranveer Singh, Vicky Kaushal, Janhvi Kaoor, Kareena Kapoor, Alia Bhatt and Bhumi Pednekar in pivotal roles.