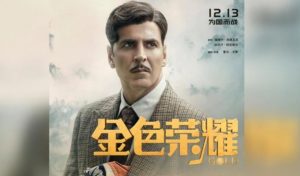 Akshay Kumar starrer 2018 sports drama ‘Gold’ is now headed for a release in China on December 13.

Akshay shared the news on Twitter, “GOLD releasing in China on 13th December, 2019!” he wrote. The film traces the journey of Tapan Das, a man who dreamt of making India win its first gold in Hockey post-independence.

The movie opened in Indian theatres last year on Independence Day, which also marked the 70th anniversary of free India’s first gold medal at the 1948 Olympics.

The sports drama directed by Reema Kagti and produced by Farhan Akhtar and Ritesh Sidhwani has an ensemble cast including Amit Sadh, Kunal Kapoor, Vineet Singh, and Sunny Kaushal, among others.

Gold was a hit at the box office and it became the Khiladi actor’s ninth film to enter the Rs 100 crore club on the 13th day of its release.

admin December 4, 2019
Previous Article Hrithik Roshan sends an emotional message to his fans by sharing a PIC of his heart; Take a look
Next Article Salman Khan is best with kids: Raveena Tandon shares throwback picture with daughter Rasha