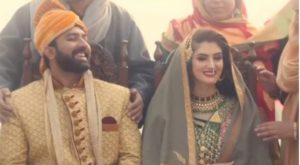 After the abrogation of Article 370, which provided Jammu and Kashmir a special status, the Valley is seeing its first feature film being shot. Kashmir: The Final Resolution revolves around the historic decision of scrapping Article 370 in Jammu and Kashmir. Yuvraj Kumar, a Mumbai-based filmmaker, who has been researching on Kashmir for the past four years, is making the film from his perspective. The director-actor, who supports the decision, informed that around 80 per cent of the film has been shot.

Yuvraj, who plays the lead role in his film, hopes that the scrapping of Article 370 will bring peace back to the Valley. Talking about his experience of shooting the film in Jammu and Kashmir post the decision, he said, “We didn’t face any kind of difficulty while shooting in the Kashmir valley. 20 per cent of the shooting is left. We hope to wind up the shoot after we get permission from the authorities. We have released the video of the song Chui Mubarak, which is a fusion song in Kashmiri and Hindi. It’s available on YouTube. We have got good response from the people. Neerja Pandit has composed the music of the movie.”

The filmmaker informed us that the film will be released across the country on January 26, 2020. The makers are also planning to screen the film at major international festivals.

The director added that Kashmir: The Final Resolution will help people understand the importance of the decision. He said, “My film will help the people in Kashmir understand the benefits of abrogation of Article 370. Jammu and Kashmir is as beautiful as Switzerland. I want Kashmir to become a favourite shooting destination for filmmakers again.”

Rippi Koul, who is making her acting debut with the film, said that the film has a beautiful message of peace, brotherhood and amity. She said, “I’m so happy that Article 370 has been abrogated. The people of Kashmir have been misled so far for the vested interests of people in power. They must accept the change now. Our movie talks about peace, love and amity.”

Hritik Koul, another Kashmiri actor in the film, also holds that the movie will be received warmly by the people of Jammu and Kashmir.