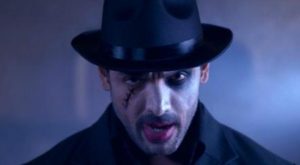 The team of Pagalpanti has posted new posters of all its principle characters on Halloween. The posters include those of John Abraham, Anil Kapoor, Ileana D’Cruz, Arshad Warsi, Pulkit Samrat, Kriti Kharbanda and Urvashi Rautela.

Sharing a poster of himself, John wrote on Instagram, “They will not only haunt you but will also tickle your funny bones. Happy Halloween #Pagalpanti begins on 22nd Nov.” He also mentioned that the film will release on November 22. The trailer of the Anees Bazmee directorial was released on October 22. John along with Arshad Warsi and Pulkit Samrat are seen to pack in some punchy dialogues in the trailer, which begins with a disclaimer ‘Dimag Mat Lagana Kyuki Inmein Hai Nahin’.