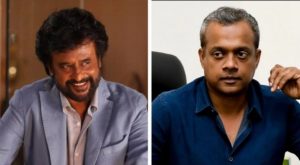 uperstar Rajinikanth is getting ready for the shooting of his upcoming film with director Siruthai Siva. The untitled flick is rumoured to have a story set in the rural backdrop. Produced by Sun Pictures, the film, tentatively titled Thalaivar 168, is expected to go on floors in mid-December.

Even before Thalaivar 168 went on floors, news about his upcoming flick is making headlines. It is rumoured that Rajinikanth might join hands with Gautham Menon for his next. Recently, the Minnale director met Superstar to narrate a script to him.

According to sources, Rajinikanth was impressed with the script and gave a nod to do the film. This film is rumoured to be produced by Ishari Ganesh under his home banner Vels Film International. Reportedly, Ishari Ganesh is keen on making a big-budget flick with Superstar Rajinikanth.

If the film materialises, this will be Gautham Menon and Ishari Ganesh’s fifth collaboration.

It is to be noted that Ishari Ganesh has pulled Gautham Menon’s Enai Noki Paayum Thota from all legal issues to ensure a smooth release on November 29. In return, the filmmaker is doing a film titled Joshua – Imai Pola Khaaka with Ganesh’s relative Varun.

Further, Ganesh is bankrolling Gautham Menon’s upcoming films with Suriya and Anushka Shetty respectively. It will be interesting if Rajinikanth too would sign on the dotted lines after getting the final narration from Gautham Menon.