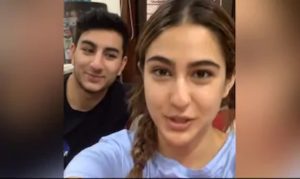 If you are having a dull day, these hilarious videos of Sara Ali Khan goofing around with brother Ibrahim Ali Khan will surely leave you in splits. After her latest Instagram entry, we are sure Sara Ali Khan can make jokes on everything, literally everything (even mosquitoes). The actress shared a couple of funny videos of herself and her brother on Monday and it wouldn’t be wrong to say that those videos are stealing the show on the Internet. In the first clips, Sara asks Ibrahim to “say something really funny really fast.” He comes up with, “Knock knock” and Sara asks, “Who’s that.” When he says, “Amos,” (one of the twelve minor Prophets) Sara jokes, “Amos-quito.” LOL! The joke on mosquitoes doesn’t end here.

In the second clip, Sara asks Ibrahim to come up with “something really funny” again. This time, when Ibrahim says, “Anna,” Sara turns it into another joke on mosquitoes and says, “Anna-ther mosquito.” The mosquito joke continued in the third clip also.

Sharing the post, Sara Ali Khan wished her fans, “Happy new year.” For those who don’t know, the day after Diwali is celebrated as the first day of the Vikram Samvat calendar and the Hindu religious festivals are based on it. Along with the “happy new year” wish, Sara hilariously asked her fans to “avoid mosquitoes.” Check out her post: Sara Ali Khan often shares pictures of herself and her brother on social media. On Diwali, she shared a family photo, in which she could be seen posing with her mother Amrita Singh and Ibrahim. “Diwali Hai. Lots and lots of love, luck and laughter from my two safer, eco-friendlier but equally loud pattakas,” she captioned the photo. She also posted Diwali celebrations pictures, one of which included her father Saif Ali Khan, Kareena Kapoor, Taimur and Ibrahim in a single frame. Take a look at her post (and swipe to see more pictures)
On the work front, Sara Ali Khan will next be seen in Coolie No 1 remake with Varun Dhawan and in Imtiaz Ali’s untitled film with Kartik Aaryan.