Singer and actress Shenhnaaz Kaur Gill records a song as a tribute for Late actor Sidharth Sukhla. She took to her twitter handle and posted the poster of the song, “Tu mera hai aur Tu yaheen hai” 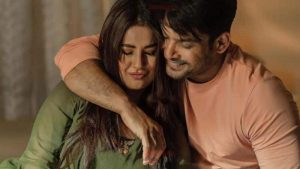 As per the sources, Shenhnaaz Gill has been through hard times. She wanted to do something for her Friend Siddhartha Shukla paying a tribute that will imprint everybody’s memory and this video might  feature some of the clips from Big Boss 13. Sidharth Shukla was most appreciated for his role in Balika Vadhu and Dil se Dil tak, Balika Vadhu was a daily soap based on the social awareness for child marriage which became very popular. He also played the role of a supporting actor in the Dharma Production movie Humpty Sharma Ki Dulhania and was also appreciated in the series broken but beautiful season 3 which was a popular series among youngsters and also won the title of  Big boss 13. He has also appeared in recent hit albums. Shenhnaaz Gill and Sidharth Shukla both had appeared in many music albums like Shona Shona, Bhula dunga, Habit, etc overwhelmed their fans #Sidnaaz.