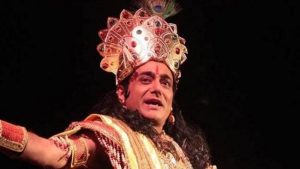 Whenever it comes to Mahabharata and Shri Krishna, only one face appears before the eyes.  That face is that of actor Nitish Bhardwaj.  Nitish Bhardwaj made the idol of Lord Krishna come alive on the TV screen.  Nitish played the classical role of Shri Krishna in BR Chopra’s Mahabharata.
His character was well liked.  It is also said that in the Mahabharata, posters bearing the image of Nitish began to be worshiped as Lord Krishna.  The actor started being addressed as Shri Krishna.  This single role of Nitish changed his life.  He gained popularity like stars and started recognizing the child of the country.  On the occasion of Sri Krishna Janmashtami, people will definitely remember the character of Nitish Bhardwaj in Mahabharata.
The popularity of the actor was also redeemed by the Bharatiya Janata Party.  He was so famous with the role of Shri Krishna that in 1996 the BJP gave him a Lok Sabha ticket from Jamshedpur.  Nitish also won the election and became an MP.  However, he quit politics after some time.
In an interview given to Aaj Tak, on coming back to politics again, he had said – not for the next fifty years, because I learned that what I wanted to do through politics, I can do it through films too.  Every person tells me that you don’t go into politics.  Now i will be in the cinema
By the way, Nitish started his acting career with Marathi theater.  Later Ravi Baswani brought him to the Hindi theater.  After this, Nitish joined the theater group Aankhen.  The actor also worked as an announcer and news reader in Bombay Doordarshan.  In 1987, Nitish made his first feature film Khatyal Sasu Nathal Son in Marathi.  After this, Trishgani in Hindi.  And then he got the role that became his identity.  That character was of Lord Krishna in the Mahabharata.
The role of Mahabharata proved beneficial for the actor.  But this did not reduce their loss either.  Consider that after the Mahabharata, Nitish got almost the same religious roles.  Among these, many serials like Vishnu Purana and Ramayana were included.  Due to the role that gave Nitish a door-to-door identity, the actor’s career was seen to be confined to the characters of a body.  Although Nitish’s few films came in between, but he did not get any special place on the big screen.
For the last few years, Nitish is seen playing an active role in acting.  Nitish played the character act in films like Prem Shakti, Mohan Jodaro and Yaksha.  Nitish Bhardwaj also played Sarah Ali Khan’s debut film as a character.
admin August 23, 2019
Previous Article Movie Review Of ‘Mitti Virasat Babbaran Di’
Next Article Parineeti Chopra Openly Speaks About A Qualities Of Her Future Husband