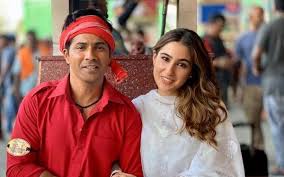 Due to coronavirus outbreak, many film’s release date was postponed by their makers. Movies like “Sooryavanshi”, Ranveer Singh and Deepika Padukone starrer ’83’ also got postponed due to current situation. Now, Varun Dhawan and Sara Ali Khan starrer ‘Coolie no. 1’ release date was also postponed.

According to the sources, the movie makers decided to not release movie on 1st May which was finalised ealier. The close source told the media, “The call will be taken only after the situation gets back to normal. But it is definitely not arriving on May 1 now. Maybe June, July or even later, depending on when the scare subsides.”

On the work front, Varun Dhawan will be next seen in ‘Mr. Lele’ which will be released on the  January 1st 2021. On the other hand, Sara Ali Khan is all gearing up fir her next movie “Atrangi Re” in which she is playing double role. In the movie, she will be seen playing love interest of Dhanush and Akshay Kumar.